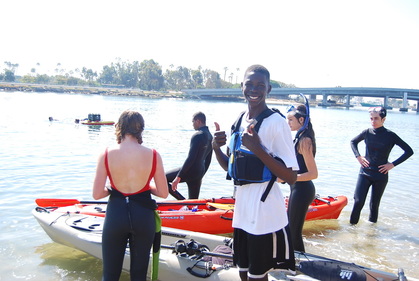 Abstract
​
In this study, we looked at the diversity of marine life in the San Diego Bay Boat Channel in liberty station. The question that guided our research is; “will there be more growth and diversity near a reef structure or in open space?” We hypothesized that there would be more growth in a place near a reef structure. To test this we used Autonomous Reef Monitoring Structures (ARMS) that were both placed in similar conditions except one was placed next to an artificial reef and one was in open water. Using a Coral Reef Count program (CPCe), we were able to analyze plates from the ARMS, to look at the percent coverage and diversity of each plate. We found that the ARMS located near the artificial reef had 30% more organism coverage than the ARMS located in an open space, both in shallow water. This suggests that areas in reefs, life will be more populated than areas that are open.
​​​​
Leadership Roles and Accomplishments

During this process I was part of the kayaking team. There was two groups of four and only two kayaks. The first group went out first and retrieved the first ARMS while the second one waited. We were out there with the swimmers and we were also holding a lot of supplies that was needed to get the ARMS out of the water. We took many pictures of the swimmers and provided a resting area for tired swimmers. During the course of this project I gained many new skills that helped me complete this project. We designed and conducted an investigation which helped us see the diversity in our bay. I also learned how to work in a group more effectively and get task done 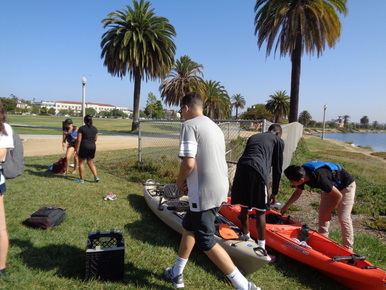 We predict that the ARMS system located next to the artificial reef will have more biodiversity because the artificial reef act as a home for some animals. Biodiversity is “the full variety of life from genes to species to ecosystems” (Wilson, Edward). This is important because the ecosystem is very crucial to our survival and everything in the ecosystem relies on each other. It’s important to have biodiversity because it contributes to producing oxygen, clean water bodies, and has potential to advance medicine through the minerals and compounds in various reefs and ecosystems (Shah, Anup).

​Oceans are the lifeblood of planet Earth and humankind. They flow over nearly three-quarters of our planet, and hold 97% of the planet's water. They produce more than half of the oxygen in the atmosphere, and absorb the most carbon from it (Project Planet Ocean) The ocean is the largest ecosystem and the earth’s life support system (Marine Conservation).

Along with many other places, San Diego's biodiversity is affected by pollution due to human interference. The San Diego Boat Channel in Liberty Station is a prominent example of this. There are always boats going through the channel, which puts chemicals into the water. This will change the biodiversity because the pollutants will kill organisms or prevent them from growing. In a count done by the Jesse Wade-Robinson class, over sixteen boats were counted passing through the channel in over a period of one hour. Another example of an affected water source is the La Jolla Cove. While the pollution there is not nearly as drastic, due to it being open to the ocean and less boats coming through,  it is a popular location to swim, snorkel, etc. Here there is more interference through humans because of them taking flora and fauna from waters. This changes the biodiversity because it lowers the number of organisms living in the area.
​
Autonomous Reef Monitoring Structures (ARMS) are reef like structures that are deployed into water to monitor the diversity of ecosystems (ARMS Overview). ARMS consist of ten plates, some with "closed spaces" that have additional pieces to mimic caves, and others with about an inch of space between them. This creates several different environments which various organisms can live in. This way there is the most accurate representation of biodiversity as possible within the ARMS.

Our research is investigating the differences between ARMS F which is located next to an artificial reef and ARMS H which is in open space. Our sample size is two ARMS unit and each has 9 plates. The dependent variable within this study is the biodiversity of each ARMS. We will be measuring the percentage of different phylum (i.e. Annelids, Algae, Bryozoa), the quantity of motile organisms, and the percentage of coverage on each plate. The independent variable is the location of both ARMS, which were already placed. Both ARMS are in a shallow muddy area (about 5-6 feet) and both are in the San Diego Bay Liberty Station boat channel. Because of this they are likely exposed to the same amount of sunlight, chemicals and toxins, and are on the same type of ocean floor. ​We predict that the ARMS located near an artificial reef will have more coverage and growth on the plates than the ARMS located in open space because there will already be organisms in the reef that will easily migrate to the ARMS.
​
For our analysis we compared an ARMS in open space (ARMS H) to an ARMS near an artificial reef (ARMS F) to look at the difference in species, amount of diversity, and total coverage of ARMS. We analyzed four plates on each ARMS, each from the top open side of the plate. This gave us eight different plates in total, that were all in very similar conditions. This allowed us to look at more accurate averages for each ARMS, as well as compare several plates with as little confounding variables as possible. First, we analyzed the plates separately, using the program CPCe (Coral Point Count with Excel). CPCe works by randomly placing thirty points on a photo of the plate. The user selects each point and distinguishes what species the point falls on using a two or three letter code. The program then calculates the percent coverage of each species. We were then able to make pie charts to display the coverage of each species with Excel. We also compared the two ARMS by what we physically saw on the plates through photos. As a final analysis, we looked at graphs of the average coverage of all plates on each ARMS.

While analyzing our plates, we looked at plates that had open spaces and were on the top side when the ARMS was submerged and the overall ARMS (all plates). This gave us four plates per ARMS that were all in very similar conditions. Which allowed us to look at more accurate averages for each ARMS, as well as compare several plates with as little confounding variables as possible. ​

Comparing ARMS in Open Space and ARMS Near Artificial Reef

There was more growth on the ARMS that was near the artificial reef compared to the ARMS that was located in an open space. Figure 6 shows that there was 61.3% coverage of the ARMS near an artificial reef, while Figure 7 shows there was 42% coverage of ARMS in an open space. This means there was 19.3 difference. -a significant difference  This is likely due to the species that were already located in the reef. The organisms living there could easily migrate to the ARMS that was close. Also, if they reproduced, the ARMS is a structure that they could easily settle into. The ARMS that was not near the reef, however, did not have this pre-existing structure near it, therefore it had less organisms that a migrated to it. This suggests our hypotheses was correct.
​
​These results matter because it's important for us to know what is happening in our waters. Coral reefs are currently endangered due to pollution and interference by humans. The population of species that are dependent on those reefs are dying and there have been many attempts by humans to save them, for example, by creating artificial reefs. If we can derive, though experiments, that artificial reefs do assist the population of organisms living in these endangered reefs, then we have a way to preserve the population.

In the future we could replicate our experiment in other areas other than the boat channel. This would tell us if artificial reefs were a viable solution in more any environment, along with giving us a larger sample size. For example, we could replicate the experiment in the ocean, where there is less pollution than the boat channel and likely different species. An experiment like this would either further suggest that artificial reefs were helping, or suggest that there was a factor in the boat channel that lead to more growth in the ARMS near the reef than in open space.